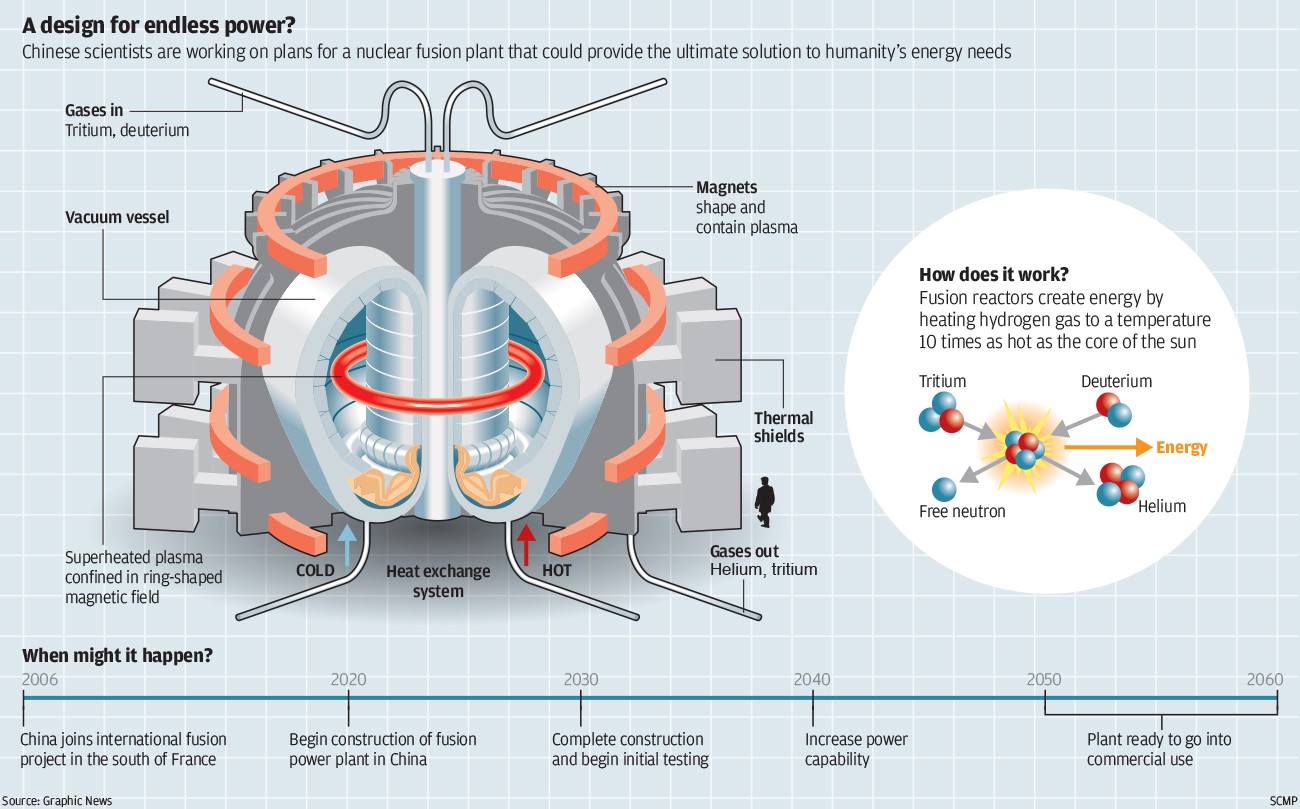 Harness the energy that powers the sun.

At least three Chinese cities are vying to host the world’s first experimental nuclear fusion power station after the country’s government threw its weight behind the ambitious project this month.
Chinese scientists have been working on the conceptual design of the project, which offers the prospect of an almost unlimited supply of energy, since at least 2013, but the central government’s imprimatur has now taken it on to the next stage – drawing up the engineering blueprints.

Shanghai, mainland China’s financial hub, has been joined by Hefei, the capital of Anhui province, and Chengdu, the capital of Sichuan province, in the race to win the lucrative project, which, according to some estimates, could cost more than 100 billion yuan (US$15.2 billion).
With completion scheduled for 2035, the reactor would heat hydrogen gas to a temperature 10 times as hot as the core of the sun. At such temperatures, atoms of deuterium and tritium, two isotopes of hydrogen, merge to form helium. A small bit of mass would be lost, creating a huge amount of energy. 
Fusion, the same process that has kept the sun burning for the past 5 billion years, is regarded as the ultimate solution to humanity’s energy needs. Hydrogen is plentiful in Earth’s oceans, and, unlike today’s uranium-fuelled nuclear power plants, a fusion reactor would produce no radioactive waste.
On December 6, a day after the central government announced it was backing the project, Shanghai’s Communist Party secretary, Li Qiang, and the city’s mayor, Ying Yong, led a delegation to China’s largest nuclear fusion research device, in Hefei, to discuss “matters of cooperation”, scientists working at the facility told the South China Morning Post.

A researcher at the Chinese Academy of Sciences’ Institute of Plasma Physics, which is based in Hefei, said Shanghai, home to a large pool of scientific talent, hoped to host the project.
“The city sits by the sea, with lots of water which can be used to dissipate the heat generated by the reactor,” said the researcher, who asked not to be named. “Personally, I’d like to see the project built by the coast, but it is not a prerequisite. The reactor could also be built in an inland area next to a lake or reservoir.” 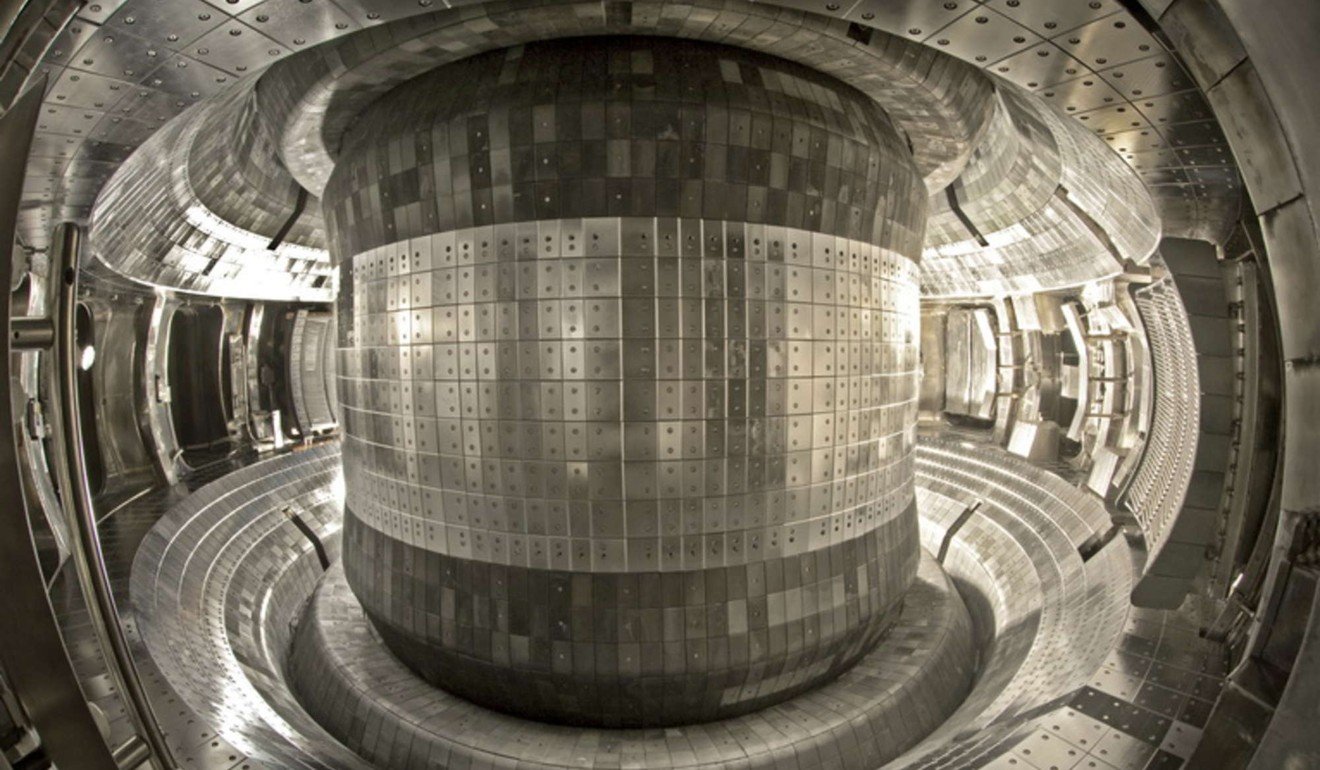 The doughnut-shaped chamber at the Experimental Advanced Superconducting Tokamak in Hefei. Photo: Chinese Academy of Sciences
Officials in Hefei, supported by Anhui’s provincial government, have told local media they mount an “all out” effort to have the reactor built in the city, already home to the Experimental Advanced Superconducting Tokamak, which has set records for the longest lasting plasma – the extremely hot gas in which fusion takes place.

Research facilities in Sichuan, in southwestern China, played key design and production roles in China’s nuclear weapons programme, and Chengdu’s bid is backed by the military and China’s powerful nuclear industry.
The province is already home to several experimental tokamak devices and Chengdu argues that its researchers have more experience in building sophisticated, unconventional reactors than those elsewhere in China.

Yang Qingwei, a Chengdu-based nuclear physicist leading the engineering design of the fusion reactor, told the Post several cities were competing for the project. 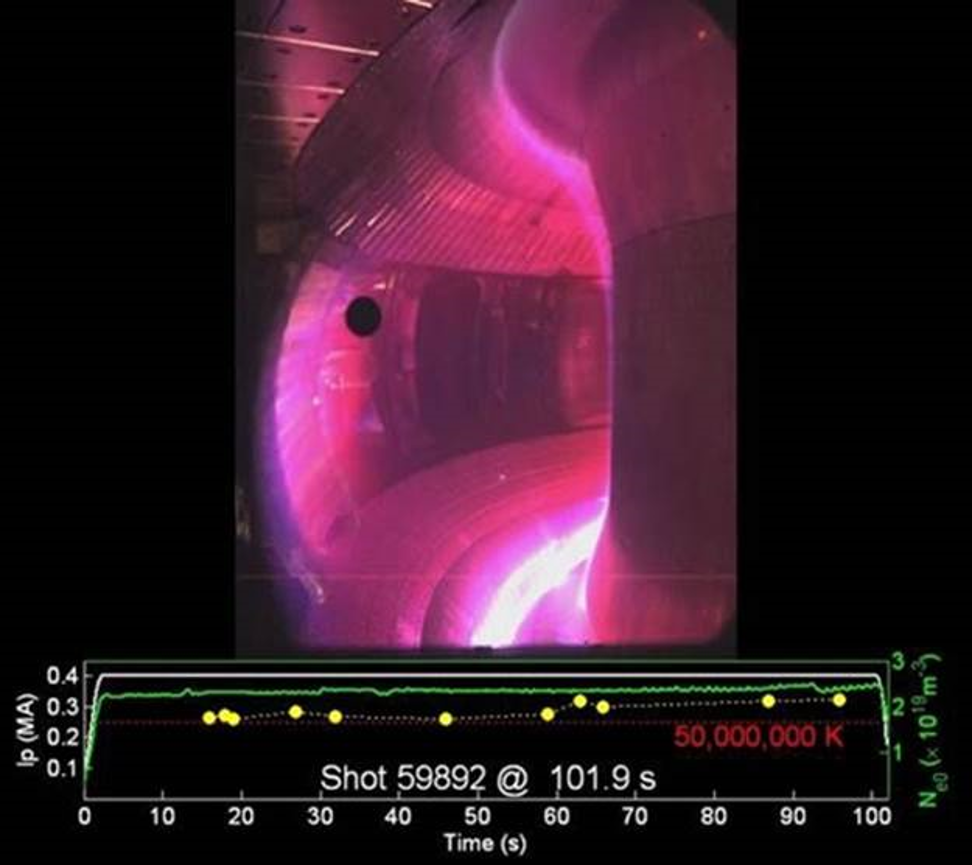 An experiment conducted at the Experimental Advanced Superconducting Tokamak in January. Photo: Chinese Academy of Sciences

“There is no consensus yet, nor any decision,” Yang, a researcher at the China National Nuclear Corporation’s Southwestern Institute of Physics, said, declining to reveal the names of candidate locations.

Xiao Jun, a nuclear scientist studying fusion at the Institute of Modern Physics at Fudan University in Shanghai, said the cities were attracted by the potential benefits of building what was likely to become the world’s first fusion power plant.
“The temptation is almost irresistible,” he said.

Major nations have been striving to make nuclear fusion a reality for more than half a century, with the tokamak, invented by Soviet physicists in the 1950s, the most popular experimental reactor design. It uses superconductive coils to generate a powerful magnetic field capable of containing the plasma in a doughnut-shaped chamber.

The United States also tried another approach, known as inertial confinement, at its National Ignition Facility in California. It aims to use lasers to achieve fusion, but has proved more difficult than originally thought, and the US Department of Energy admitted last year that the US$3.5 billion facility might never reach its goal.

With strong financial backing from the Chinese government, Chinese researchers have extended their fusion research lead over the US in recent years, setting records for the longest lasting, most stable plasma and developing new technologies and materials in state-of-the-art laboratories. 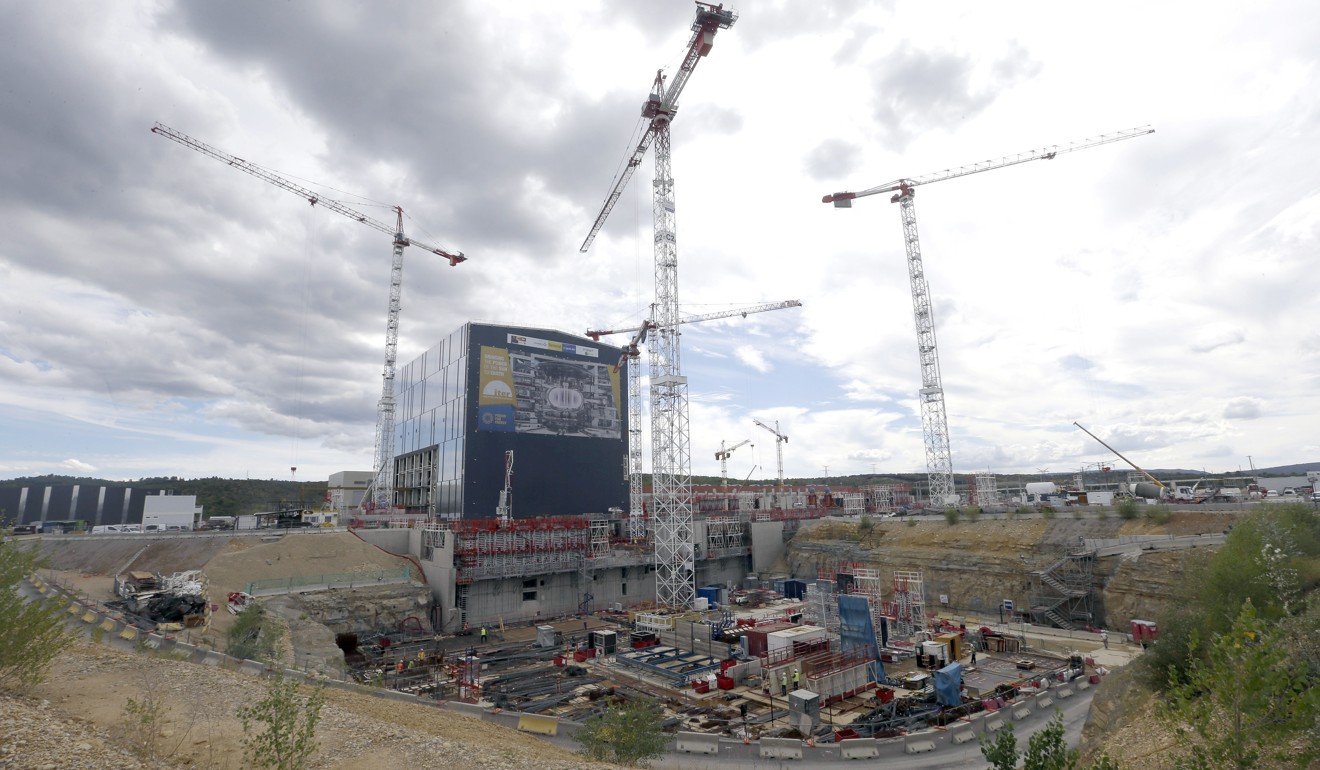 Construction work at the ITER site in Cadarache, southern France, in September last year. The tokamak reactor is scheduled to produce its first plasma in December 2025. Photo: AP


The planned Chinese fusion reactor will rely heavily on the design of the International Thermonuclear Experimental Reactor (ITER) under construction in southern France, but is aiming for a much more ambitious goal.


ITER, which has attracted investment totalling €22 billion (US$26.1 billion) from the European Union and countries including China, the US and Russia, is the most expensive scientific facility ever built. But it is only aiming for a fusion burn lasting about 10 minutes, while the researchers working on the Chinese reactor hope to achieve one lasting months.
Tang Jun, a fusion scientist at Sichuan University’s Institute of Nuclear Science and Technology in Chengdu, said achieving the goal would require the development of many technologies, instruments and materials that did not exist today.

For instance, the reactor’s inner wall would have to be made of super strong alloys to withstand the heat and bombardment of high-energy particles, the plasma would need to be tightly and precisely controlled to prevent destructive energy spikes and the electric coils would have to be bathed in a large volume of super-cold liquid to maintain their superconductivity, otherwise the magnetic field would disappear.

“This project will draw research talent from other cities in China and all over the world,” Tang said. “It could turn a city to one of the most vibrant innovation centres on the planet.”
According to a timeline posted on the website of the Chinese Academy of Sciences this month, the design work will take a couple of years, with construction starting in 2021. 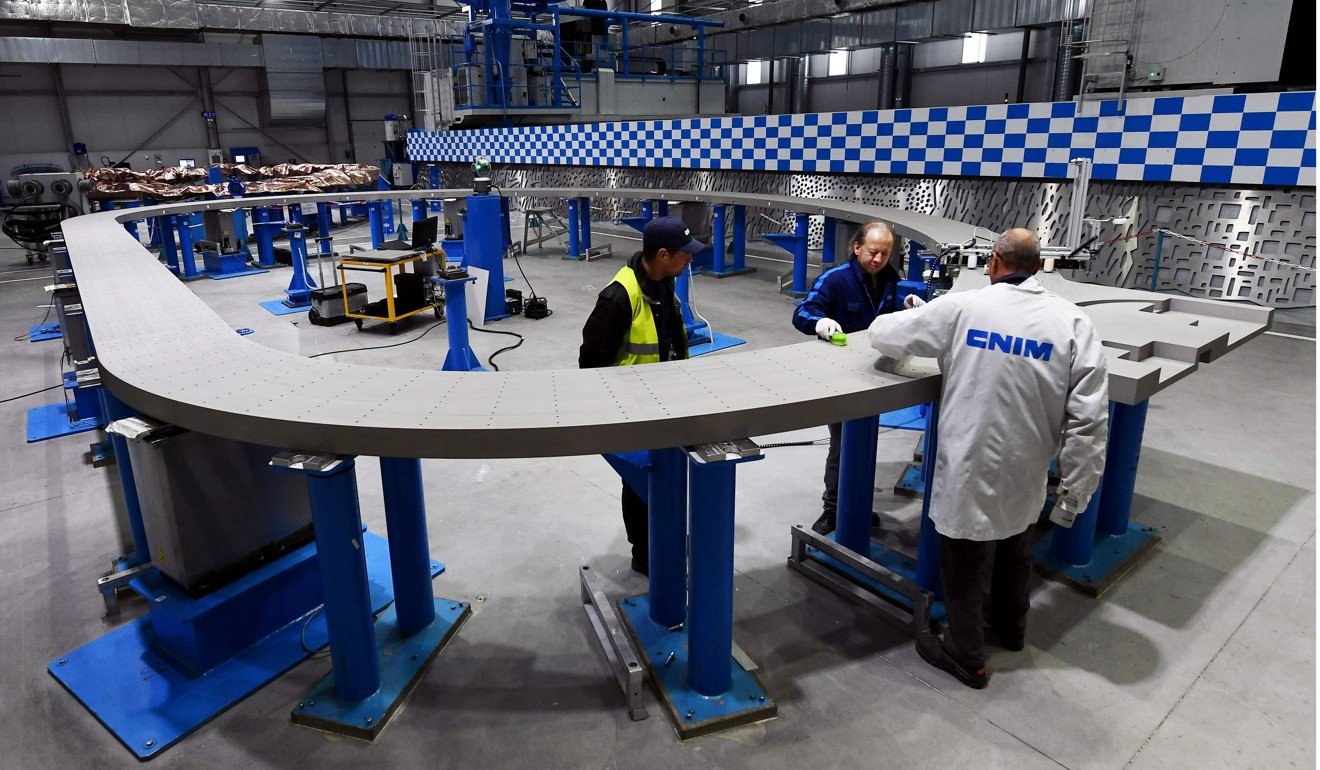 But Lei Yian, an associate professor at Peking University’s school of physics who was previously involved in fusion energy research at the Los Alamos National Laboratory in the US, said the cities in race should realise it was a high-risk endeavour.
“I doubt the facility can be up and running in 20 years,” he said.
Fusion projects around the world have encountered unexpected technical challenges that have led to serious delays. The ITER project, for instance, was scheduled for completion 10 years ago, but that has been postponed to the mid-2020s according to even the most optimistic estimate.

While China could learn lessons from ITER, and Chinese engineers and workers had a reputation for meeting deadlines, Lei said they would face huge technical obstacles to reach the targeted burning time.
“The cities must consider the risk that the project turns into a money pit,” he said, adding there were also environmental concerns.
When fusion starts, a large number of fast-flying neutrons are generated, which can not only damage the reactor’s components but also pose a threat to the wider world.
“If some of the neutrons escape to the environment outside, even at a small percentage such as one in a thousand, they will pose a serious threat to people living and working nearby,” Lei said.
SCMP